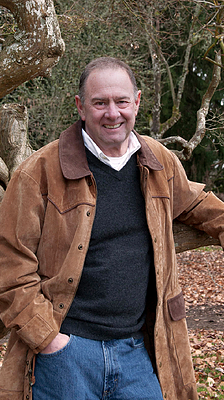 Stephen W. Long was born in Santa Fe, New Mexico where his father, Walter, was an engineer for the Atomic Energy Commission at Los Alamos. The family later moved to Davenport, Iowa, and then to California. Stephen attended Cal Poly University in Pomona, majoring in English and minoring in about everything else the school had to offer, including bee keeping and tractor driving. His first real job was as a swamper and then big-rig driver for California Motor Express.

In 1975 Stephen, his brother Rob, and their father designed a motorcycle product called Link-Lok. They applied for and were granted a patent on the device. Rob and Stephen then founded a business named Long Run Products, Inc. The first product was the Link-Lok but others soon followed, including two trailer lines; one for consumer recreation and one for industry. The trailer division was split off to form Long Run Trailers. Later still, Stephen was cofounder and manufacturing manager of Primal Tool.

His passion for creative writing eventually led to meeting best-selling novelist Elizabeth George. Stephen was accepted into a small class led by Elizabeth, and that association resulted in a grant from the Elizabeth George Foundation. Stephen's debut novel THERE'S A SOMEBODY is the product of that grant.

Stephen lives with his wife in a hundred year old home in Oregon's Willamette Valley.