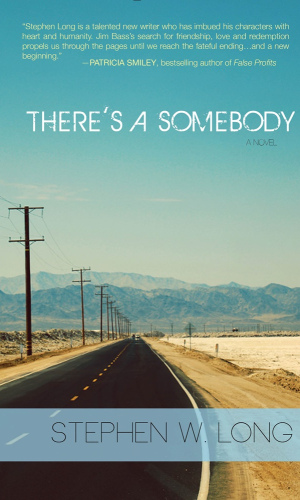 THERE'S A SOMEBODY (PAPERBACK)
Description

Jim Bass is a twenty-two-year-old failed college student who sees the world through the tragedy of his sister’s death. It’s a perspective that sets him on a journey that starts with misunderstanding and whose path is self-delusion, but whose destination might just be redemption.

There’s a Somebody begins as Jim, having dropped out of school days before graduation, abandons both the woman he loves more than anything else, and the daughter he has yet to meet. A loner by nature, Jim builds a successful business in an attempt to fill the void in his life and to have, as he puts it “… something people can point to, a number, something no one can deny.” But while he’s good at racking up miles and socking away dollars, one misstep leads to another in his personal life until he’s in danger of losing everyone he cares about.

Luckily, he finds improbable guidance along the way. There’s Mrs. Garcia, a sage and practical neighbor who knows the pain of loss in her own life. And Owen Youniacutt, truck driver, serious drinker, and business partner. As Owen can attest, Jim has no lock on poor choices. Then there’s the new girlfriend, Niki. What happens when you love someone, just not enough? Jim is about to find out.

In an age when “growing up” is something to be avoided, Jim Bass bucks the trend. He wants the wife, the child, the stability. But as he discovers, even when you don’t get what you want, it’s still possible to weave together a pretty good life.